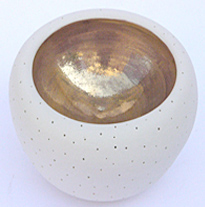 >>Learn about the Andy Prize for Israeli Artists...

AIDA was founded in 2003 with the goal of nurturing the careers of emerging decorative artists from Israel and was built on three key elements: a passion for the arts, working together as a team and caring about one another...these were all Andy’s great talents.

Andy formed a particularly strong bond with AIDA’s artists. Each artist became a part of an extended family and Andy celebrated each artist's achievements with the pride of a mother.

Through her leadership at ACBP and numerous other philanthropic endeavors, Andy was a shaping force in initiatives aimed at strengthening Jewish identity worldwide, with a focus on Jewish youth, the arts and education. In 2003, she and her husband, Charles, were named honorary citizens of Jerusalem, the first North American Jews and the first couple to receive this historic honor.

Andy served as Founder and Deputy Chairman of The Gift of New York, a non-profit initiative which provided admission to New York City’s cultural, arts, entertainment and sports venues, without charge, to the bereaved families of the 9/11 terrorist attacks. The program, intended to give solace to the grieving families, ran through the spring of 2003 and served 12,000 families.

In 2003, she and Charles joined with their friends, Dale & Doug Anderson to create AIDA: The Association for Israel’s Decorative Arts, a vehicle designed to expose Israeli artists to North American galleries and collectors, as well as to educate North Americans about the decorative arts in Israel. Over the years, a significant educational component developed and partnerships formed with Bezalel, The Corning Museum of Glass, Haystack Mountain School, The Penland School, Pilchuck Glass School, Shenkar and Watershed. Several years ago, Charles established The Andrea M. Bronfman Prize for the Arts (“The Andy”) to honor his wife’s life-long passion for and support of the arts, and to create a showcase for Israeli decorative artists.

Andy inherited her love of Israel from her parents and her love of art from her mother. Her father, Hyam, was, for many years, a leader of the United Joint Israel Appeal of Great Britain. Her mother, Doris, was the founder of the British Friends of the Museums of Israel. Andy  devoted much of her energy to fostering interest in Jewish identity, community and meaning, both in North America and in Israel.

She and Charles were co-founders of Birthright Israel, a program offering 18-26 year-olds their first Jewish living and learning experience in Israel. In just 11 years, more than 300,000 participants have benefited from this program.

“There was an undeniable force that seemed to emanate from Andy and make good things happen for many, many people,” said Jeffrey Solomon, President of ACBP. “She derived much of that energy from the young people whom she made it her purpose to serve.”

Andy was a member of the Board of Directors of the American Jewish Joint Distribution Committee, Inc., New York; The Jewish Museum, New York. In her capacity as National Co-Chair of the Canadian Friends of Beth Hatefutsoth, she created and directed a national cultural project, “A Coat of Many Colours: Two Centuries of Jewish Life in Canada,” a major traveling exhibition with a companion book and film. Her commitment to human rights and fundamental freedom led her to found the “Group of 35” – Montreal Women’s Campaign for Soviet Jewry. The “35s” played an active role in alerting both the Canadian government and the public at large to the plight of Soviet Jewry.

Born in London in 1945, Andy moved to Canada as a young bride where she lived until 1998, when she and her husband, Charles, moved to New York City. In May of 2000, she was awarded Doctorate of Philosophy, Honoris Causa, from Tel Aviv University.