NEWCASTLE — The clay's the thing at Watershed Center for the Ceramic Arts. "Do you know what a pleasure it is to talk clay 24 hours a day? I can't do that at home. My family wouldn't allow it," says Yael Novak, a ceramic artist from central Israel.

She traveled to Newcastle to spend two weeks among 10 leading Israeli and American ceramic artists for a residency at Watershed, in the verdant rolling hills along the Sheepscot River of midcoast Maine.

Residencies at Watershed are intended for artists who want to recharge their internal batteries. It's an intense period of focus and immersion.

Creating new work is not requisite, but this group produced dozens of pieces.

Their residency ended July 1, and this month the Toby Rosenberg Gallery in Portland exhibits work the artists made during their time in Maine, as well as other recent pieces by the American artists who live mostly in the Northeast. 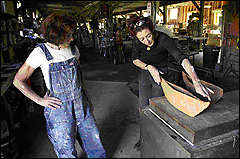 Staff photo by Jack Milton
Rina Peleg, of New York City, and Anat Bar el, of Jerusalem, discuss Bar el's clay vessels. Their residency ended July 1, and now some of their work and the work of the other eight participating artists is on display at Toby Rosenberg Gallery in Portland.

"Dialogue: Israeli and American Ceramic Artists in Maine" will remain on display at the Rosenberg gallery through July 30.

The residency enabled artists to talk and exchange ideas. The exhibition gives the public a chance to see new work by artists who are advancing the discipline, Rosenberg said.

"These are some of the top people in the field, here in America and in Israel. They show all over the country and internationally, and they're all known for their innovation and new ideas," she said.

The work comes in many shapes and sizes, from heavy, leaden sculptural pieces to razor-thin, delicate objects that feel nearly weightless.

Using Newcastle clay, Anat Bar El, from Israel, made a series of boats, some with a sparkling salt glaze. They are long and narrow, suggesting a Chinese rice boat. For her, the vessels represent her time spent in Maine, and they're also a metaphor for her personal journey.

Christina Bertoni, an American artist from Rhode Island, incorporates found objects into her work. For one piece she made at Watershed, she used part of a shell and a piece of metal from an old boat, both of which she laid on top of bowl-like form. She also added a star, and called her piece "Star of the Sea," conjuring the Star of David.

Michal Alon, from Israel, created layered sculpture, with frayed, torn edges that speak to the terrestrial quality of the land.

The Association of Israel's Decorative Arts arranged the residency. The group's purpose is to promote Israeli artists at home and abroad.

Rosenberg scheduled the exhibition after reading about the joint Israeli-U.S. residency in a Watershed bulletin.

"I saw that these Israeli artists would be here and I knew the strongest community who would be interested in their work would be from Portland. The Jewish community has very strong ties in Portland, and there seems to be growing interest in contemporary ceramics. People are searching for ways to see something fresh and new," she said.

The Watershed experience is all about creating community.

The artists arrive as strangers but live communally in a small complex of buildings near the end of a pastoral country road that winds through farms and conservation land. They work in the solitude of the studio and spend the rest of their time in groups talking about their art.

The dress code is strictly casual, and many people wear dust-covered smocks all day long.

Lynn Thompson, Watershed's executive director, likened the residency program to a corporation's research-and-development division. The value of the experience doesn't necessarily exist in the work that's produced during an artist's two-week stay, but in the ideas and concepts that are hatched.

One of the technical revelations during the recent residency was the use of beeswax as a finishing agent. One artist experimented with it, liked the results, and soon several others followed.

"This is an opportunity for professional artists to have time with their peers, where there are no expectations and no requirements," Thompson said.

After-dinner conversations fuel the creative process. The artists show slides of their work and talk about their lives and careers.

During her turn at the slide projector, Novak showed images to illustrate how her forms have evolved into a designer line of tableware. Her trademark is a small dimple that she incorporates into each piece.

While some of her peers create sculptural pieces purely for aesthetic pleasure, Novak favors user-friendly function.

"I like pots that pour," she said. "My shapes must be clean, comfortable and humorous."

A potter for 15 years, Novak said her style began to evolve after she attended a workshop at Haystack Mountain School of Crafts in Deer Isle in 1992.

"For me, America, because of its vastness and openness, inspires a sense of freedom. I wanted that sense in my work," she said.

Staff Writer Bob Keyes can be contacted at bkeyes@pressherald.com